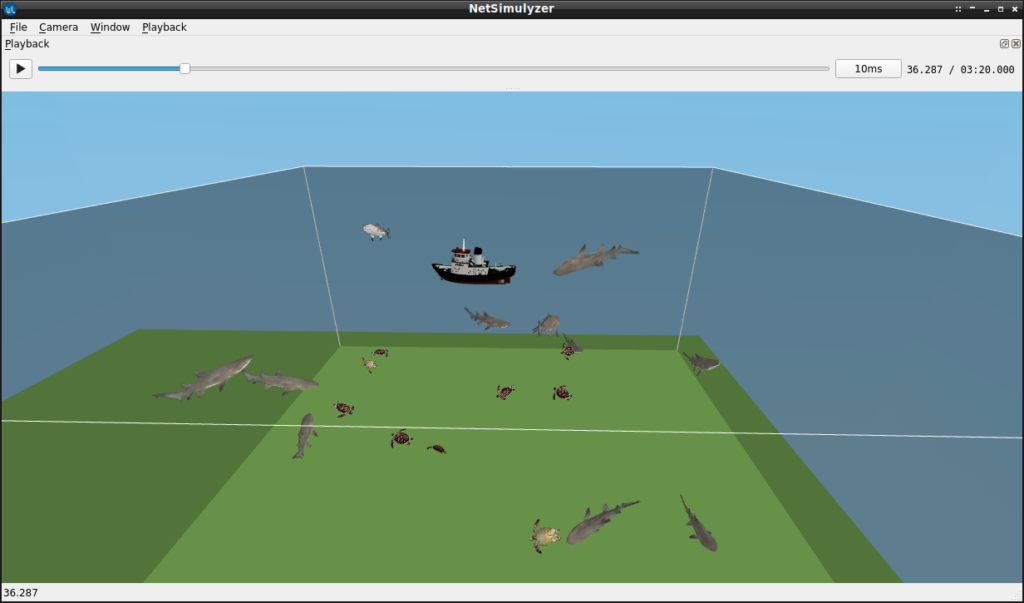 have to be realized the very physical limits of acoustic underwater communication systems and the features available in popular network simulators for simulating different aspects of such underwater networks.

Only after a clear understanding, one can design a new protocol for the underwater network and make it work as per their expectation.

For example, the scenario shown in the right side is an example of UWSN output of ns3 simulation visualized with NetSimulyzer 3D Visualization tool.

Underwater communication system involves the transmission of information through water using any possible means, such as acoustic(sound) waves, electromagnetic(radio) waves, or optical(light) waves. Both radio waves and light are electromagnetic waves; their main difference is their frequency of operation. While using an electromagnetic wave for communication, it is possible to use higher bandwidth and frequency. But, the properties of electromagnetic propagation on water cause high absorption of energy, and the reproduced signal at the receiving end will get distorted much.

Unlike the other electromagnetic wave-based terrestrial communication technologies (both radio and light), acoustic underwater sensor networks face a new set of challenges in communication due to their long propagation delays, low data rates, and high transmit power that involved in its nature and hence require an entire redesign of the entire network protocol stack in almost all the layer. Most importantly, the wireless MAC protocols and network routing protocols that were developed for terrestrial wireless networks, mobile ad hoc networks practically will not work under underwater communication scenarios. So, one should keep all this in mind and design their protocol within the allowed physical limits of typical acoustic communication. (for example, one should not try to accomplish a 100MBps real-time TCP multimedia connection over this poor acoustic aqua link)

Most of the existing network simulators are capable of simulating different networks such as MANET, 3G, and even 4G LTE networks. But, as of now (while writing this book), there is no simulator in this world for modelling all the characteristics of a UWSN acoustic communication. Most popular free as well as commercial network simulators including QualNet, OPNET, Aqua-Glomo, SUNSET, OMNET++, ns-2, and ns-3 cannot effectively model all the very physical aspects of the underwater environment with their present level of implemented simulation models. But, among them, ns-2 is also a suitable candidate to consider for underwater network simulations.

ns2 is the first open-source simulator that has most of the features for modelling and simulating a realistic acoustic UWSN communication system. In addition to that, with the help of another related software called Aqua3D, we will be able to visualize the nodes and their transmissions of a UWSN in a virtual three-dimensional space; in a better way. As far as I know, the Aqua3D of the Aqua-sim project is the only available tool that can be used to visualize a UWSN with 3D capabilities.

Ns-2 is the second version of ns (network simulator). The first version of ns is originally based on a REAL network simulator and was developed in 1989. ns-2 is a discrete event simulator used for networking research by individual researchers and organizations for around three decades. ns-2 provides support for the simulation of different layers of wired, wireless, and mobile ad-hoc network protocols. The second version ns-2 is widely used in academic research, and it evolved with a lot of new modules contributed by researchers, universities, and other organizations during the last decades. There are different extensions available to simulate different technologies such as Wireless Sensor Network, Vehicular ad-hoc Network, 3G Network etc. Aqua-Sim is one such extension available to simulate Underwater Sensor Network.

Nam is a animation tool developed for visualizing the outputs of ns-2 simulations using the trace files generated by the ns-2 simulation. A typical trace file is a text file that will contain information about the network topology, traces for packet events, mobility events etc. By using this time-wise organized events of a output trace file, Nam will create a two-dimensional representation of the events from which one can understand and visualize the network topology that they simulated in ns-2.

Originally, in 1990, Nam began at LBL in collaboration with the VINT project, as a simple tool for animating network packet events and substantially evolved during the following years. Now, it is maintained as an open-source project at SourceForge. The following output shows the simulation output of a typical MANET scenario.

The default nam is not capable of displaying the three-dimensional outputs of UWSN simulations.

Aqua-Sim supports three-dimensional modelling and deployment of underwater networks. Further, Aqua-Sim can easily be integrated with the existing modules of ns-2. Aqua-Sim is in parallel with the CMU wireless simulation software module. Aqua-Sim is independent of the wireless simulation module and is not affected by any change in the wireless software module. On the other hand, any change to Aqua-Sim is also confined to itself and does not have any impact on other modules in ns-2. In this way, Aqua-Sim can evolve independently.

Aqua-Sim follows an object-oriented design style and all network entities are implemented as classes. Aqua-Sim effectively simulates the attenuation of underwater acoustic channels and the collision behaviours in long delay acoustic networks. Moreover, Aqua-Sim supports three-dimensional network deployment and provides a rich set of basic and advanced protocols[1]. One can see more details about the design and implementation of Aqua-Sim in [1]. Through several case studies, the authors of [1] showed that Aqua-Sim is a powerful simulation tool, with high fidelity and flexibility, for underwater networking research.

According to the Aqua-Sim’s manual, it has the following mac protocols implemented in it:

Similarly, the following routing protocols are implemented in it:

You  can find the procedure for installing Aquasim at the following link:

Aqua3D is being developed at the University of Connecticut to be the counterpart to the Underwater Sensor Network (UWSN) lab’s Aqua-Sim. Aqua-3D is nothing but an enhanced Network Animator (Nam) of NS-2. In fact, Aqua-3Ds extends the functionality of Nam to make it possible to visualize the three-dimensional underwater networks.

The main features of Aqua-3D includes:

The following figure shows an example of the 25 Node Underwater Network scenario which is  Visualized with Aqua3D.  The brown square at the bottom is representing the underwater ground. The blue square at the top is representing the sky. The middle node is at the water surface. The Aqua3D can visualize packet transmissions as expanding sphere and even can visualize packet drop events.

You  can find the procedure for installing Aqua-3D at the following link:

One may install an old linux for installing aquasim and aqua3D.

Installing an old Linux under VirtualBox and using Shared Folders.

One may follow the VM based installation procedure of Aquasim and Aqua3D in the following link: