It was developed by Cycleo, a company of Grenoble, France, later acquired by Semtech, which is the founding member of the LoRa Alliance. LoRa enables long-range transmissions with low power consumption and covers the physical layer, while other technologies and protocols such as LoRaWAN (Long Range Wide Area Network) cover the upper layers[1].

One of the key parameters of the LoRa modulation is the Spreading Factor (SF): this value, ranging from 7 to 12, expresses how much a packet is spread in time (i.e., how long it takes for a chirp to complete a complete scan of the available bandwidth).

Transmissions using a low SF need a lower Time on Air (ToA) (assuming the same bandwidth) than packets using SF values closer to 12. The advantage of using higher SFs is in the increased sensitivity of the receiver. Transmission using SF7 that cannot be detected by a LoRa receiver may be correctly demodulated if performed using SF12.

Another key feature of the modulation is the quasi-orthogonality between transmissions using different SF values: even if two packets overlap in time, a receiver may still be able to demodulate one of the packets, assuming that they are using different SF and that some restrictions on their reciprocal power are respected[4].

The LoRa Alliance first defined the LoRaWAN standard with the objective of creating a medium access scheme and a set of network management policies that leverage the properties of the modulation to achieve good network performance at a low price in the complexity of the devices[4].

There will be three kinds of devices in a LoRaWAN network: End Devices (EDs), Gateways (GWs) and a Network Server (NS). End Devices are basic network nodes: typically inexpensive, they are constrained by low computational capabilities and are usually powered by a battery.

Gateways are high-end, mains powered devices that are tasked with collecting the data transmitted by End Devices leveraging the LoRa modulation. After a packet is correctly received, it is forwarded to the Network Server via a link with high reliability and speed. The Network Server functions as a sink for data coming from all devices, and as a controller of the network that can leverage some MAC commands to change transmission settings in the End Devices[4].

End Devices of the most basic type are defined as Class A devices, and are currently the only kind of device supported by this module. Class A devices perform transmission in a totally asynchronous way, and open two receive windows of fixed duration after each transmission to allow the Network Server to transmit acknowledgments or MAC commands[4].

Another important characteristic of the standard is that it is defined to work on unlicensed bands in various regions, which usually subject transmitters to regulations on duty cycle. This fact will be explained in greater detail in the MAC layer model section of this document[4].

This is an ns-3 module that can be used to perform simulations of a LoRaWAN network. This module was developed by Davide Magrin and Martina Capuzzo of the Signet Lab at University of Padova’s Department of Information Engineering, under the supervision of Lorenzo Vangelista, Marco Centenaro, Andrea Zanella and Michele Zorzi.

This module contains a series of classes and examples aimed at modeling the modulation and medium access technology of a LoRaWAN network. Thanks to a simple underlying physical layer model and to the regulations imposed on traffic in the unlicensed bands this technology operates on, this module can support simulations featuring a large number of devices that access the wireless channel infrequently.

Aside from models representing the various components of the network and helpers to set them up, the module comes with a packet tracker that monitors network performance, and with facilities that print the network topology to file for easy debugging and simulation monitoring. Various examples ranging from simple to complex network configurations are also provided[2].

Step 1: Install ns-3.35 using the following procedure or any other procedure of your choice.

The above command will create a folder “lorawan” under the “src” directory and clone the LoRaWAN project in it.
The following screenshot shows the successful cloning: 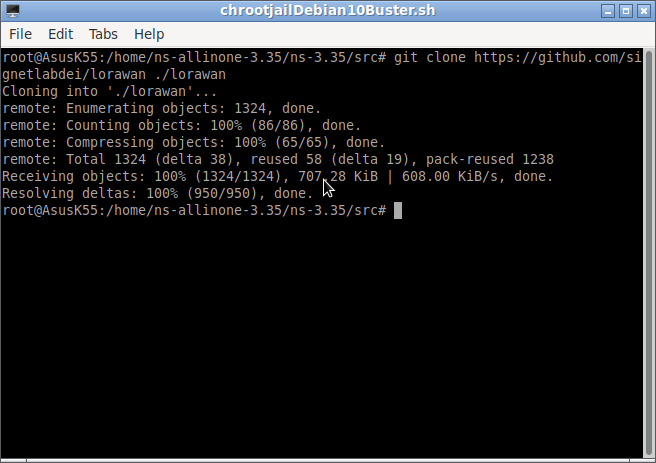 The above command will configure the make system and produce output like the below one on success.

#compile ns-3
$ ./waf
The above command will compile ns-3 with the newly added LoRaWAN Module and produce output like the below one on success. 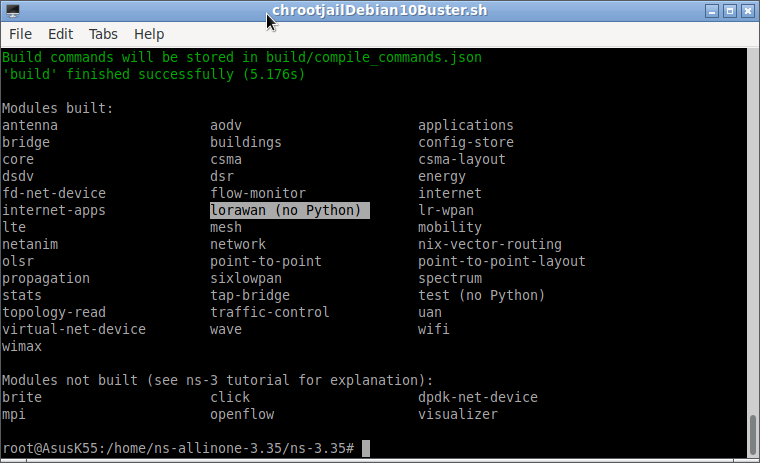 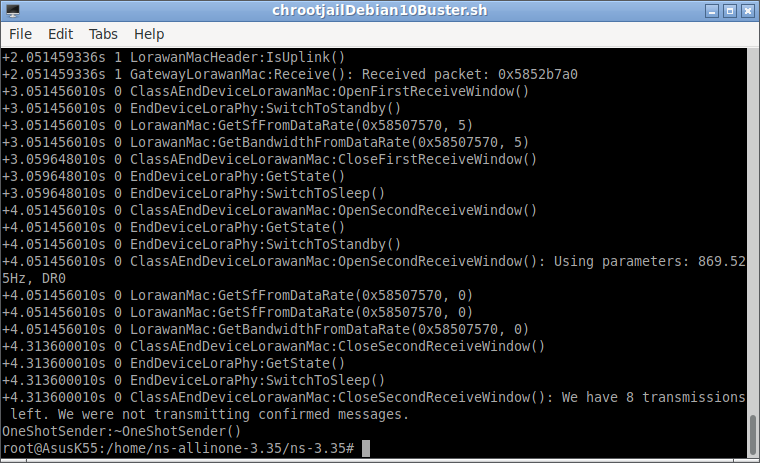 The following command will run the Adaptive Data Rate Algorithm (ADR) example simulation.  This program creates a simple network that uses an ADR algorithm to set up the Spreading Factors (SF) of the devices in the Network.
$ ./waf –run adr-example
This will run the 24000-second simulation and the following screenshot shows the successful run of the simulation. 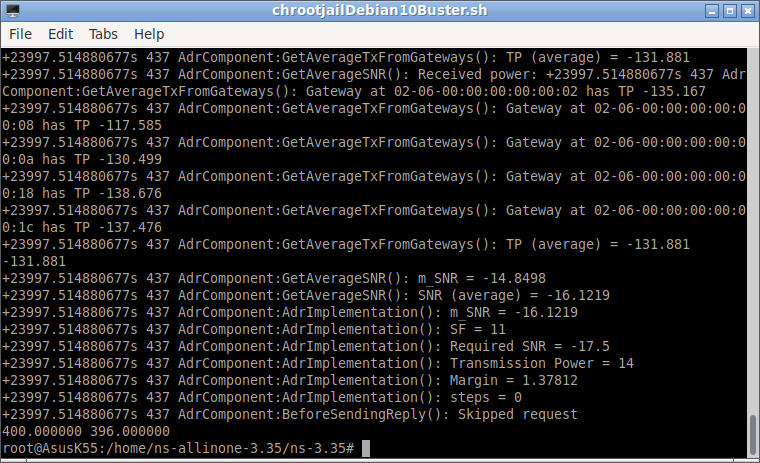 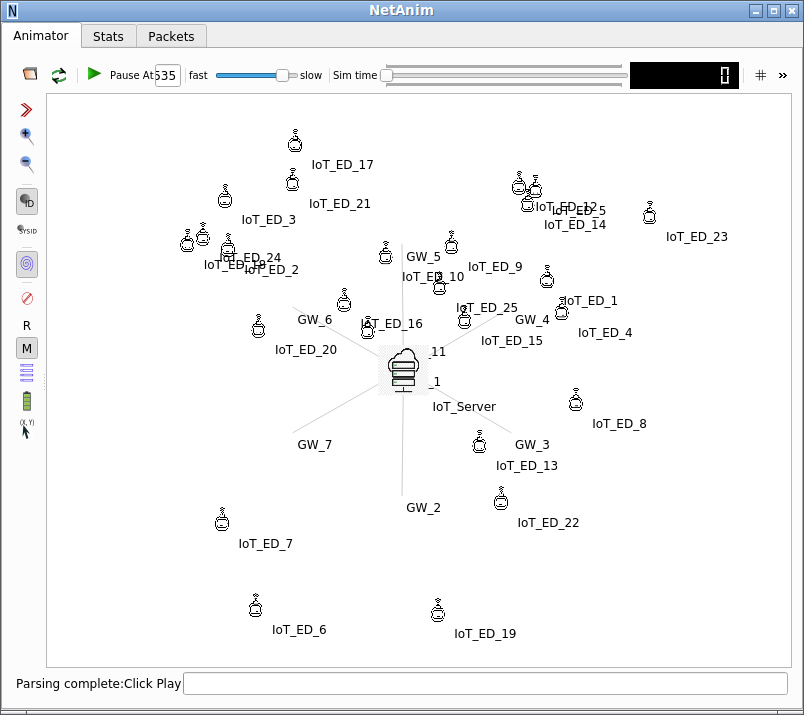 Ok. To understand the way of generating the following NetAnim output of that example scenario, one should answer the following questions:

One may think that creating and using  NetAnim output is not at all needed for research-level work. But while experimenting with several topologies, I didn’t get the correct PDR for one particular topology.  After a lot of effort only, I found the “logical error” that I made in that particular topology. It was related to the automated placing of the WS nodes and their locations- I was able to find that mistake only while visualizing the scenario under NetAnim.

The Animation of the Above Network

The following is the gif animated video of the same example scenario. In the following output also the GW nodes are not correctly getting rendered.  We have to use a suitable image to represent the GW node.

Simulation of a simple LoRaWan Network with Static IoT-EDs

The following is the output of the same example script (with a little bit of modification). In this, we use only one GW node and now the GW node is getting rendered correctly with a suitable image.

Simulation of a simple LoRaWan Network with Mobile IoT-EDs

The following is the output of the same example script (with a little further modification). In this, we make the LoT-EDs to move – so that making it as a Mobile LoRaWAN network.

The following screenshot shows the Energy Consumed by the 50 IoT EDs at the end of the 1200 second simulation. 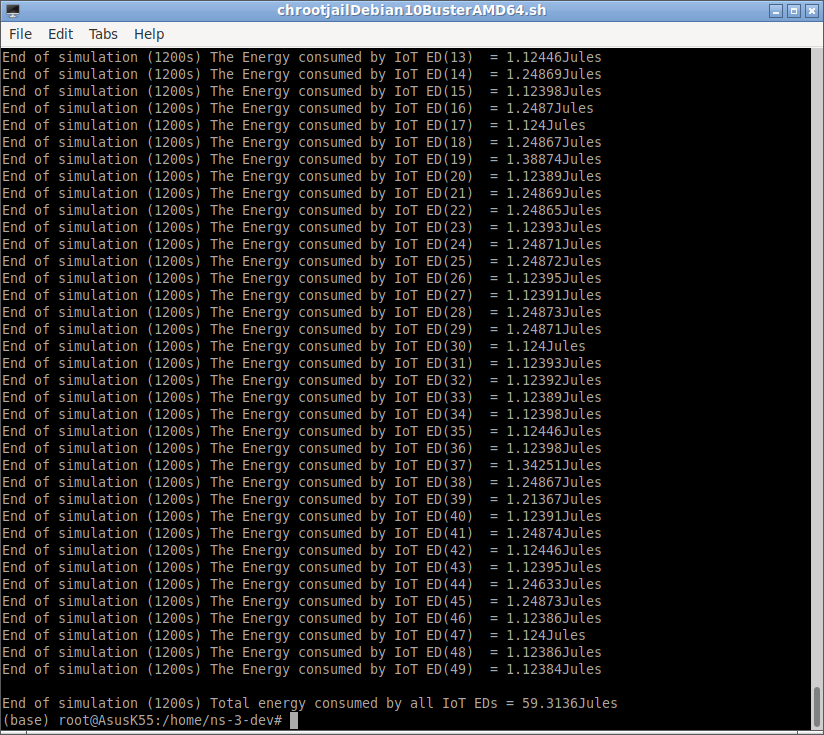 The following Gnuplot Shows the Energy Consumption over time in ED(0). 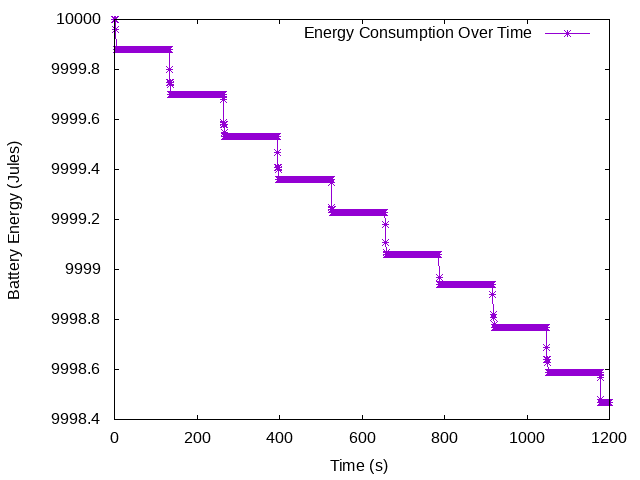 The following Gnuplot Shows the Comparison  of Energy Consumption over time in ED(0) and ED(1). 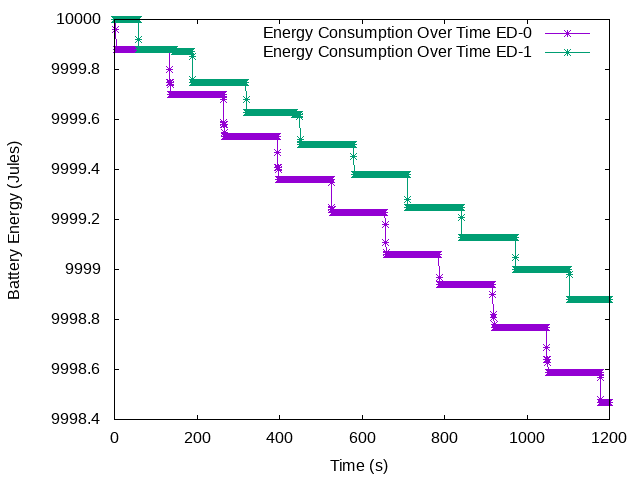 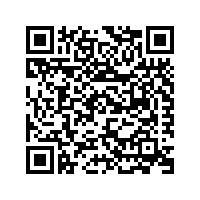