In this article, we will see a trick to install ns-3-dev under chroot-jail

The following article explains a chroot jail based installation of ns-3.35.

That article explained the following :

In the above-mentioned steps, instead of installing ns-3.35 at the 5th step, we are going to install ns-3-dev version as per the following procedure since we can not install the latest ns-3-dev in the same way since the installation script “ns3” will not allow us to run it as root user.

This procedure assumes that the user already set up a chroot jail and installed a suitable Linux OS under it. (I mean, up to step 4 in the above-mentioned list).

Installation of ns-3-dev under chroot

You may download a compressed version of ns-3-dev or directly clone it using “git” command. The following shows the way of cloning ns-3-dev project repository using “git” command.  Here we try to install ns-3-dev under a folder named “/home” (even though /root is the default privileged home directory of the user root under chroot jail)

The above command will clone the entire ns-3-dev project under the folder home. So, now the folder /home/ns-3-dev will contain the dev

The following shows the section/lines that needed to be edited.

$ cd /home/ns-3-dev
$ ./ns3 configure –enable-examples –enable-tests
The following screenshot shows the successful “configure operation” in which you can see the modules that are configured to build. 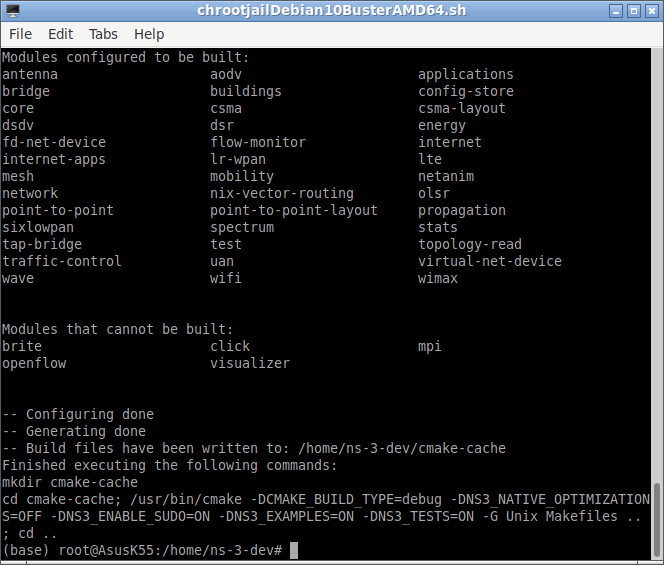 The following screenshot shows the successful installation of ns-3-dev under chroot jail. 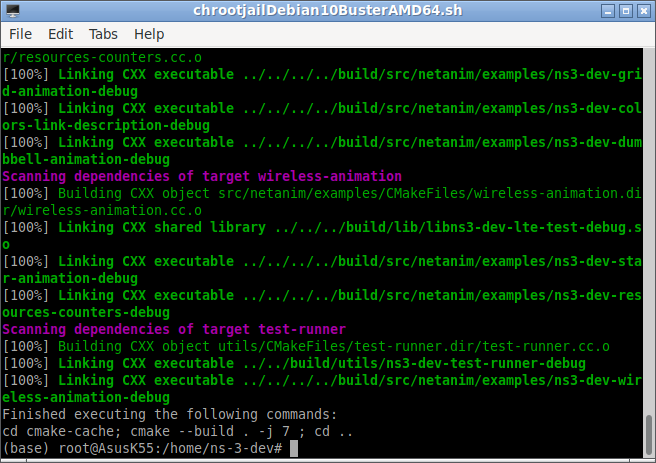 Step 4: Testing the Installation by Running an Example

We may test the installation by running the example script firs.cc as follows:

Some Examples of “chroot-jail” based ns-3 Simulations